Thanks to﻿ all who ﻿made our 2015 Wine Tasting Gala ﻿a g﻿﻿rand success! Special thanks to our fantastic wineries and generous auction donors. Please support them with your patronage.﻿﻿﻿

Thanks to all who made our 2014 Mardi Gras "Fun" Raiser a huge success!
Special thanks to participating wineries and raffle donors:

The bride's godfather with Mario Meatballs
Attendees arriving at the Spring Rosarito Mixer on April 25, co-hosted by the Rosarito Theatre Guild and Nuevo Amore Restaurant, found themselves not just at another pleasant meet and greet, but also as guests at the arranged marriage of two fictitious Italian families, complete with name tags telling them their identity and relationship to the happy couple. A multi-tiered wedding cake provided by Marisa Villalban of Pasteles y Gelatinas para Toda Ocasion completed the stage set of an Italian oceanside wedding reception strung with lights. The event catered by Nuevo Amore included scrumptious Clams Catalana along with other antipasto items. Emcee was wedding singer/Minister Dino Martino who looked suspiciously like the long-lost cousin of RTG Artistic Director Craig Schaefer. 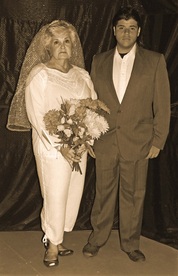 The betrothed
The betrothed couple could perhaps most kindly be described as a May-December pair and the bridegroom sported a bit of a shell-shocked look about his impending nuptials. Perhaps he was not disappointed, then, when the ceremony was interrupted by the bride’s Aunt who did, indeed, know of “a reason why these two should not be joined together.”

All ended happily when young Tony Pizza joined in holy matrimony his beloved Pippa Pepperoni, instead of the….well…. not-so-young, Signorina Spaghetti who instead married her long-time suitor Mario Meatballs. Can anyone say that the two newly joined couples, Pepperoni Pizza and Spaghetti and Meatballs, were not matches made in heaven?